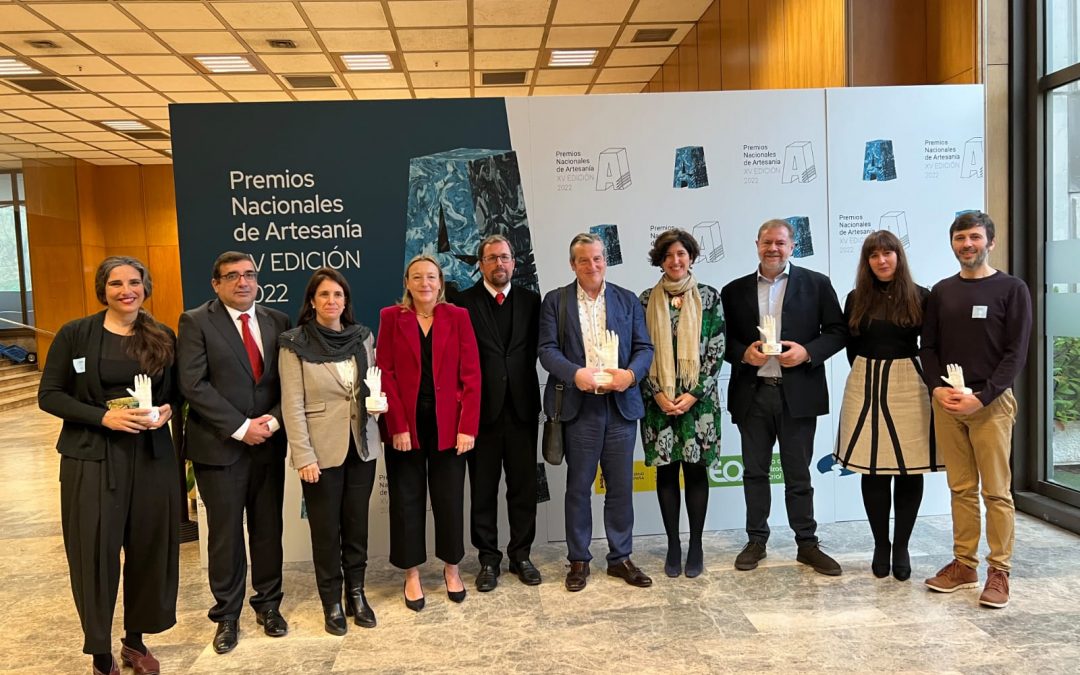 Paco Luis Martos has been awarded the National Crafts Award 2022 (15th Edition), receiving 7.000€ as a prize for his consolidated work. The ceremony took place on the 16th of December 2022, in Madrid (Spain) at the Ministry of Industry, Commerce, and Tourism. It was headed by the General Secretary of Industry and SMEs, Raül Blanco, together with the General Director of the EOI Foundation, Nieves Olivera, and the General Secretary of EOI, Carmen Paez.

Paco Luis Martos, is a master craftsman specialized in Mudejar crafts, a trade that he has recovered by making new designs as well as restoring and preserving covers of the national historical heritage. He stands out for valuing and promoting the Mudejar coffered ceiling in the 21st century, in the international market for artisan ornamental structures. Paco uses wood with sustainability certificates and also, demolition wood and water-based varnishes and natural products that are respectful to the environment. In addition, he works actively for the dissemination of the knowledge that he has been accumulating, training apprentices in his workshop and giving talks and practical workshops throughout Spain.

The Spanish National Crafts Awards are organized every year by the Ministry of Industry, Commerce, and Tourism through the School of Industrial Organisation (EOI) and its craft promotion department, Fundesarte. Its objective is to promote the development and competitiveness of artisan SMEs as well as encourage innovation, design, and capacity for adaptation to new markets.

92 candidates from all over Spain have been registered in this edition which has five different categories: National Craft Award, Product Award, Entrepreneurship Award, Promotion Award for public and private institutions.

Aldanondoyfdez has received the Product Award for his design Jane, a piece that vindicates the act of walking around the cities. This model responds to a minimalist design that is resolved with a single pattern that is sewn on the back. In this series, the most artisanal and traditional footwear techniques come together with clear innovations in the field of pattern-making and design. A hallmark of the brand.

In the entrepreneur category, Santiago Besteiro was selected. He is dedicated to the design, development, and production of high-quality artisan pieces made with natural leather and biodegradable materials. A project in which he prioritizes research with new forms and materials, a simple and functional design, and offers the highest quality standards.

The Violería School, has been awarded the Promotion Award for private entities with its project called “the Ibero-American Network of Violería Schools”, whose objective is to create an international network for the protection, dissemination, and realization of this type of musical instrument. The Network is configured as a group of public and private entities that wish to collaborate in the creation of an organized structure to cooperate and achieve corporeality recognized by the cultural policies of the linked countries.

And finally, the Promotion Award for public entities has gone to the School of Training in Crafts, Restoration, and Rehabilitation of the Albayzín Historical, Artistic and Cultural Heritage, for its project of “Dual Training in Inclusive Crafts” that allows people with disabilities to be a productive group with equal access to the working market. The Albayzín School is leading a model of social responsibility in Spain based on rights and proper management of diversity. This project makes it possible for the first time in Spain to accredit level 1 artisan skills for people with intellectual disabilities.

More information about the Spanish National Crafts Awards at